Impact of cbd on Covid-19

Covid-19 is a disease that occurred unexpectedly two years ago and has had a negative impact on the economy of countries around the world, and in particular on human health and the capacity of health personnel.

Most people who get infected get over the disease with mild symptoms such as loss of smell and taste, tiredness, mild fever and dry cough. Some people also experience more serious symptoms such as difficulty breathing and chest pain. There are no rules on whether a person gets over an infection with mild symptoms or more serious ones. This is precisely why it was necessary to introduce preventive measures at the time of the initial outbreak of the virus in order to protect people from possible infection.

The most basic measures that we have been sticking to since the beginning of the epidemic include wearing a surgical mask, regularly washing and disinfecting our hands, avoiding crowds and working from home, if possible. A good year ago, however, vaccines were introduced so we could all get vaccinated.

For most vaccines, people had to receive two doses, but only one dose was required for Janssen. Vaccines mainly help to get over the disease with milder symptoms than we would if we were unvaccinated, and reduce the chances of a person getting infected and suffering from covid-19. All vaccinated individuals are advised to continue to adhere to all preventive measures.

Recently, a new study was launched at the University of Oregon to demonstrate that cannabis acids prevent covid-19 infection in human cells by blocking the entry of SARS-CoV-2 into these cells.

There are several compounds in cannabis that act as a medicinal agent for preventing covid-19 infections. The authors of the study believe that a combination of vaccination and the use of cannabis compounds would help to cope with this virus and the disease it causes.

Although new variants of the virus are constantly emerging, the consumption of two cannabis compounds in the body would create a more demanding environment for the virus to attack and the consequences it leaves behind. 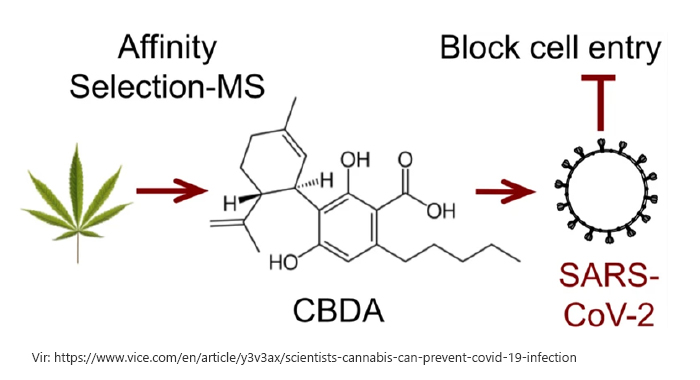 The compounds that are so effective and can be obtained from cannabis are CBD-A or cannabidiol acid and CBG-A or cannabigerol acid.

Scientists have come up with this data through a technique called affinity selection mass spectrometry. It is used for the rapid assessment of a large amount of compounds. The technique was started by incubating the live virus with cannabis compounds, and after 24 hours, this combination of virus and compounds was injected into human epithelial cells.

It was found that cells treated with CBD AND CBG-A were not infected with SARS-Cov-2. Following the observation, the same procedure was performed on live variants of alpha and beta and concluded that the effect of the compounds was the same in both cases.

None of these compounds can be obtained in the body by ingesting cannabis, so it is recommended that they be obtained by taking capsules or by drinking a liquid – oral use.

Both compounds can therefore be taken orally and are safe to use. This clearly shows that regular consumption of CBD drops, traps and capsules containing cannabis extracts is extremely useful for protection against covid-19.